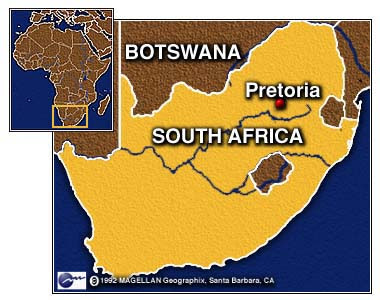 Residents in Pretoria have reported a strange hovering craft in the sky that appeared to be “heart shaped”. The craft had three big lights and hovered motionless for two hours before flying off into the distance.

Several residents of Pretoria reportedly saw the strange craft and were convinced that it was no airplane.

Although the strange craft is said to have hovered for a two hour period, no photographs or video was taken. Pretoria has had several other reports of UFO activity in the past. A video shot by a policeman in 1996 is said to be of an UFO that several other witnesses reported seeing. A police helicopter was send in to investigate but could not catch up with the strange bright orb.

Engela van der Spuy, 67, who lived in Attie Street in Booysens, contacted Beeld after she watched the strange set of lights on Thursday night for the second consecutive night.

Van der Spuy for the first time saw the UFO on Wednesday night shortly after sunset in the western sky.

“I couldn’t make out the shape of the object because the three lights were too bright, but it almost had a heart shape because there were two lights on top, a blue light on the left and an emerald green light directly next to it, on the right side, with a big bright white light underneath it which shone straight down,” she said.

According to her, the UFO hung in the air for two hours without moving and then, at about 20:30, slowly started moving down, diagonally to the left and still down, disappearing behind the horizon.

On Thursday night, the UFO again appeared shortly after sunset and at 20:30 again started moving down before disappearing.

“I called all the neighbours and we looked at it together, but no one could figure out what it could be. All we knew, was that it definitely was not a star or a normal plane.”

Henrico Swart, 19, Van der Spuy’s neighbour, who looked at the UFO through binoculars, was dumbfounded.

“It has to have a very strange shape, because even through the binoculars I couldn’t make out the shape,” said Swart.

“All you could see, were three bright lights.”

On enquiry, spokespeople from the Hercules police station, the Johannesburg Planetarium and the South African Air Force had no knowledge of the incident and were unable to explain the phenomenon.

“I don’t think it is a flying saucer, because we would’ve been able to see the saucer shape. This is something even stranger,” said Van der Spuy.